All rights reserved, no fair use if not otherwise specified.

Some of the photos are CC0 (Creative Commons License for public domain). You can find them in the CC0 category. All of the photos in this category can be used for whatever you want, commercial use is allowed and you don’t have to credit me. (But you can, if you want to).

Contact me under »Ctrl+I« above if you want to use another photo. We can talk about crediting and possibilities. 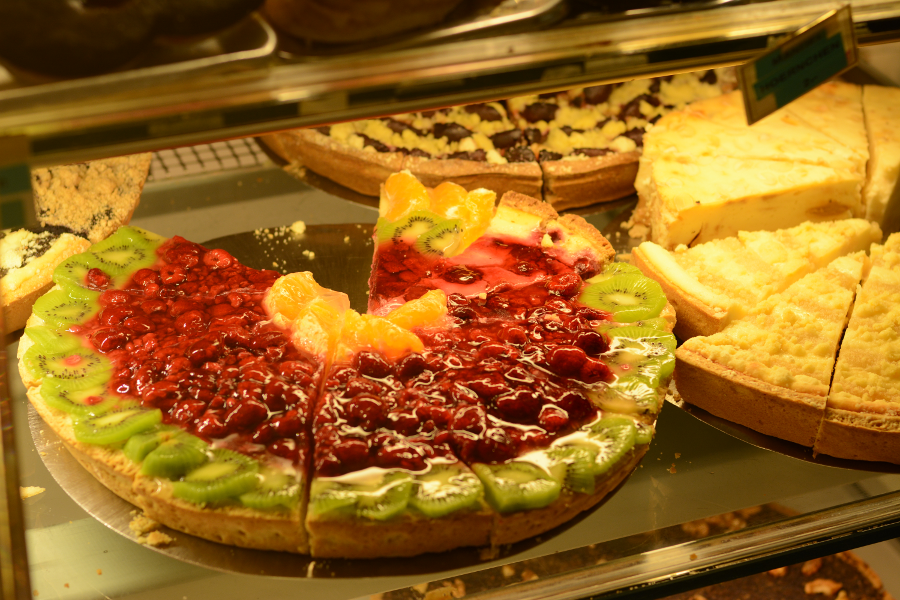 The human is a creature of habit. Once you truly arrive somewhere you start going to your favorite place, eating your favorite food and wearing comfortable jeans while doing so. Is that #boring or just just nice and bequem? I don’t know. But I have experienced this fact first-hand each time I settled in a new location. When I came to Erlangen, Nuremberg, Cologne, even in Berlin, where I was week-wise, visiting/living with friends. And now that I’ve come to Munich… well.

I must admit, I’ve never been a huge fan of Munich. I have spent few holidays in Bavaria as a kid, visited Munich occasionally and kept it in mind as “the city of expensive shit” to be honest. Maybe “the city of too many pedestrians” in second place. But… now that I am here I want to the make the best of it. Really, I try to unpaint the blackness I’ve perceived as a part of my ‘radical honesty’ lifestyle for a while now (not really following a definition, but I like the term). I am trying to make it less black and more gray (baby steps, people, baby steps, okay?).

Therefore, I think it’s best to break my routine. And, as I implied, I always create one wherever I go. Once the quarter I live in is charted, I go to the same places over and over again. In Cologne that was Kaffeebud, a really nice café in Ehrenfeld. In Berlin it was ‘Wohnzimmer’ (it’s crowded but wasn’t that crowded 10 years ago, also they serve awesome breakfast, hipsters or not).

In Munich, I started going to the places in “Universitätsviertel” (University quarter) and I mostly fed on curry and rice from Orange Box. Nothing wrong with that so far but then I thought… one year has about 50 weekends. What if I could manage to check out 50 new places each year? I am now at 3 of 50. Here’s the place I checked out on Nov, 26:

A woman I asked for directions on my way there told me “Everyone here knows this café.” Café Ignaz is on the corner of Georgenstraße to Isabellastraße in Schwabing. It’s a quarter with many historical apartment buildings but also a lot of shops and cafés. If you go there don’t make the mistake of thinking “Oh, this street doesn’t look as if there’s gonna be much more…”. If you’re walking the streets of Schwabing, just try walking a little longer and there’ll be some other interesting place like 500m from where you just thought nothing else would come. It will unlikely end in a painful feet experience without a coffee.

But what about this weekend’s cafe? Café Ignaz is somewhat special. It seems to have been there for over 30 years and they offer various vegetarian and vegan dishes. The main dishes cost around € 16 and include an entrance dish–salad or soup–AND cake. The salad is very big compared to the German average “Beilagensalat”, also that side salad is not really on the side of anything, it’s so big, it has its own plate 😉 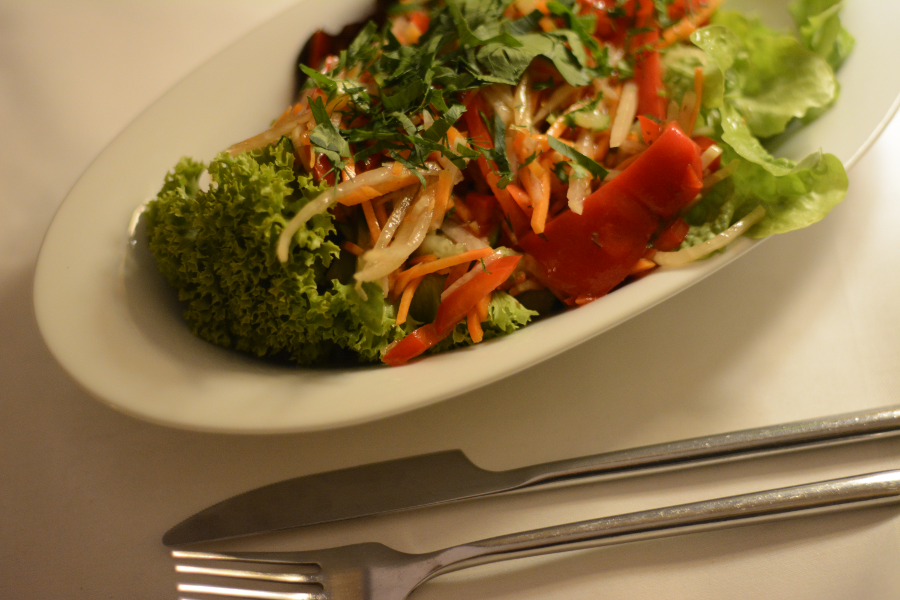 Well, so we get to eat a salad, a main dish and dessert. What I didn’t know at the point where I ordered: You’ll be surprised about the size of the portions, even if you’re from the US. Neither me, nor my male and always hungry companion were able to eat a whole plate of any of it, so I asked them to put the rest in one of my boxes: 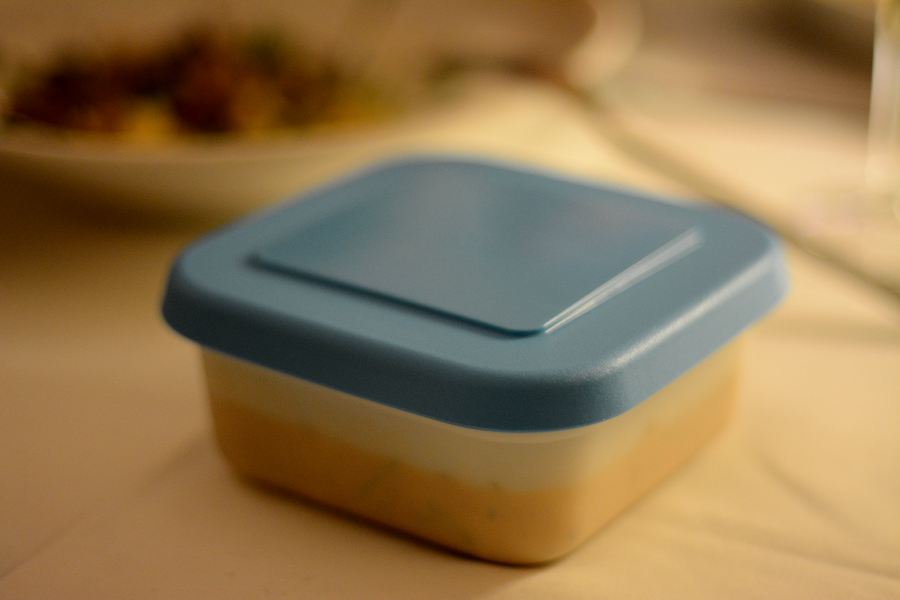 I always carry a box with me now, not only in restaurants, also in the student cafeteria. I hate throwing away food and I never finish my whole plate. So please just think about it, it’s a good thing! And what’s a tiny little box compared to all the other crap in your huge saggy bag anyway? In most restaurants, people are happy that you have them pack your food. They don’t have to throw it away and if you bring a box they also save packaging. I never really had problems with that–and if someone would get at me with some hygiene “reason”, I won’t visit their place a second time anyway 😛

What do we eat? 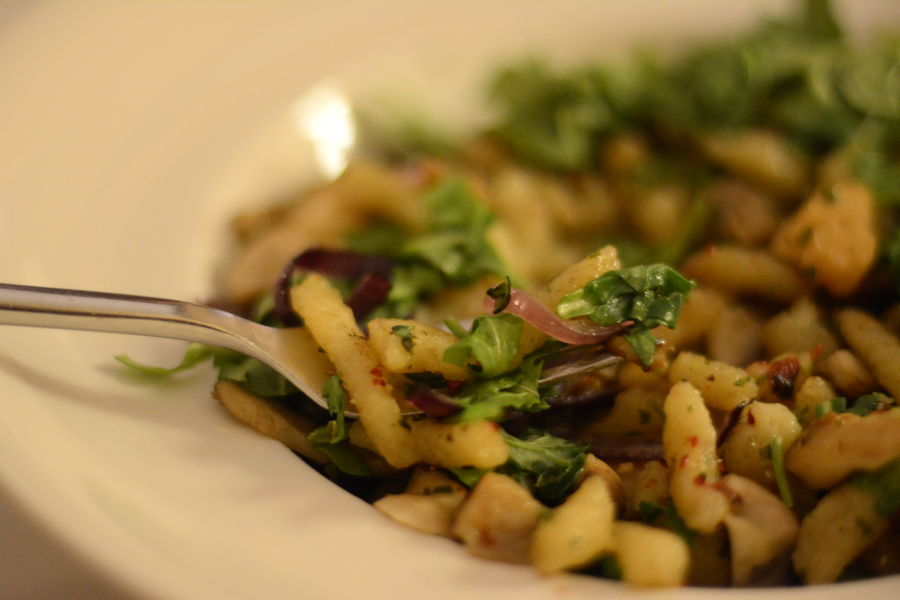 Our dishes are a vegetable wok plate and Spätzle (which are a special kind of German noodles) with onions and mushrooms. Very tasty. We order vegan only. That’s the theme for tonight. Because… I want to prove the point that vegan can be delicious. To myself and to my plus one. The Spätzle are actually so tasty, I can’t believe they are vegan. Also, if you like oil, this is THE dish for you. It is basically drowned in oil. And it is made with a lot of herbs and spices. I personally love rosemary and those noodles contain lots of it. I also love ognions. 🙂 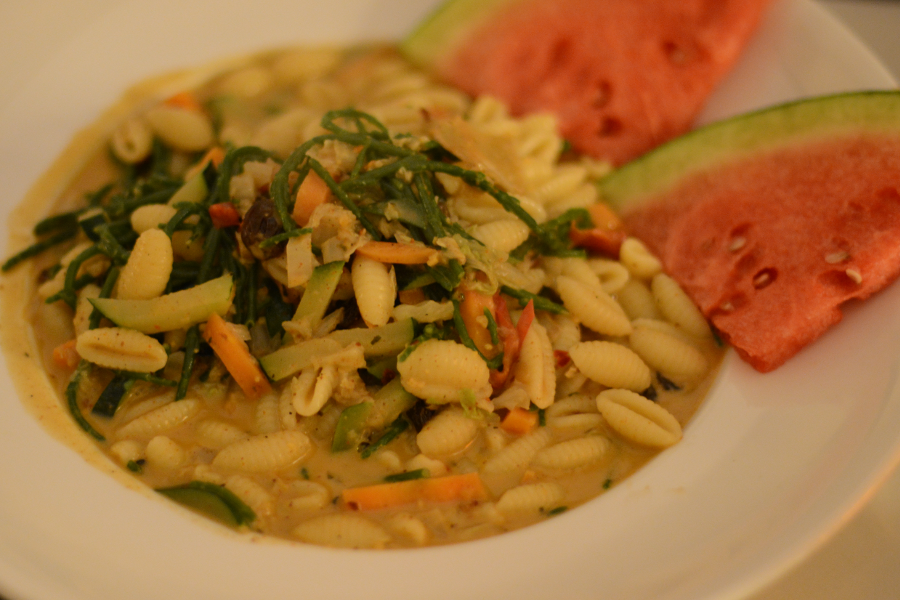 I try a drink called a “Hot Hugo” which tastes like something between “OK, interesting” and “I’m gonna be sooo drunk after this”. 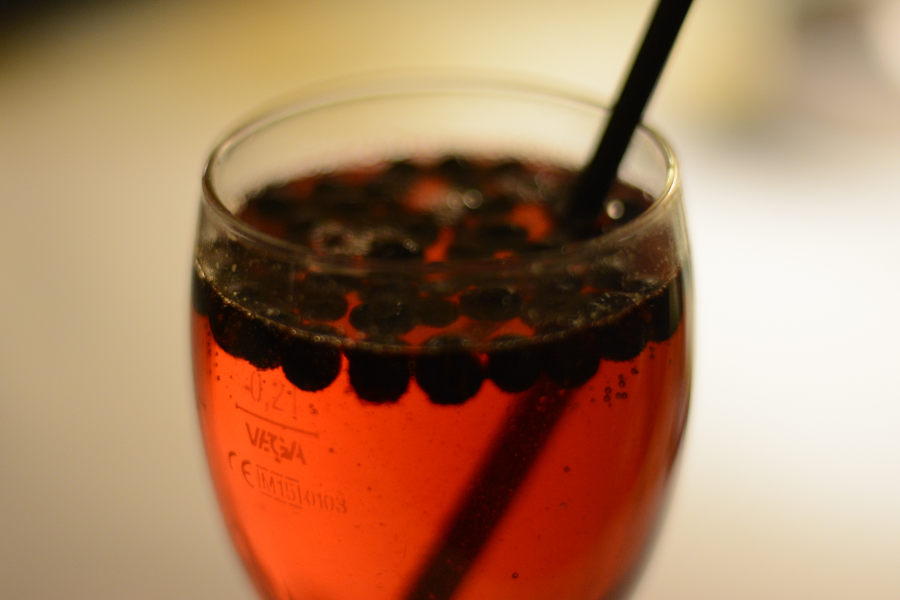 The card says you’ll be kindly asked to pay € 2 for a cake if you order a huge piece as your “included piece” and we do order a very huge piece. But we’re not charged with anything. Obviously that was an average cake without saying. But it is that big, I take half of it home as well o.O 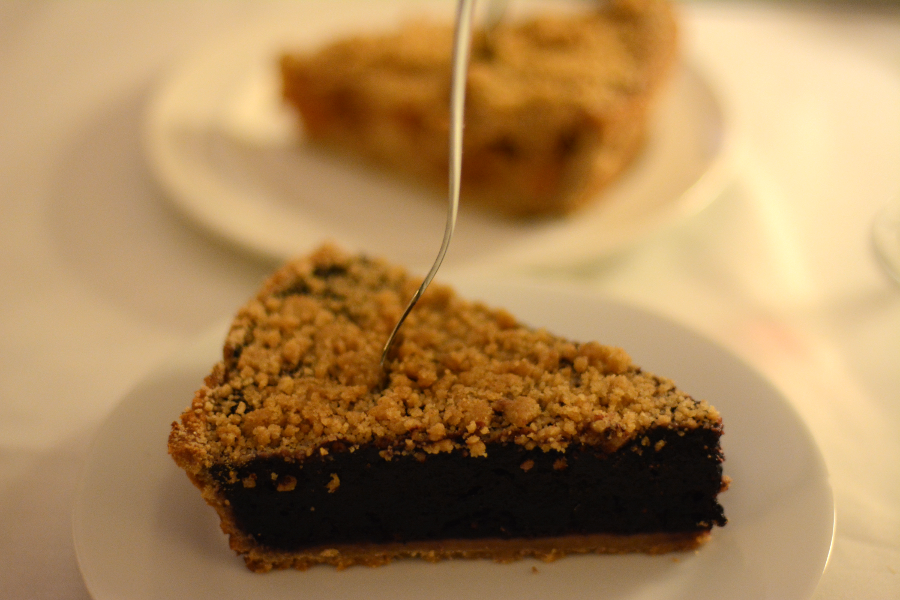 In the end we have some cake. My man doesn’t like it but what do men know anyway? Mine is cherry, his is apple. And I promise, this is a very good apple cake, yum. However, it would be even better if it was warm.

So well… I do recommend this place. I’m glad I tried this and if you like big sized portions you’re gonna love it there. If you like cake, you might also be interested in getting your Sunday cake (do people do that where you come from? Please let me know in the comments ^^) for at home from there. It has a very long list of vegan and vegetarian cakes. I took some pictures (below) of the selection of cakes they serve, and that’s not all there is. 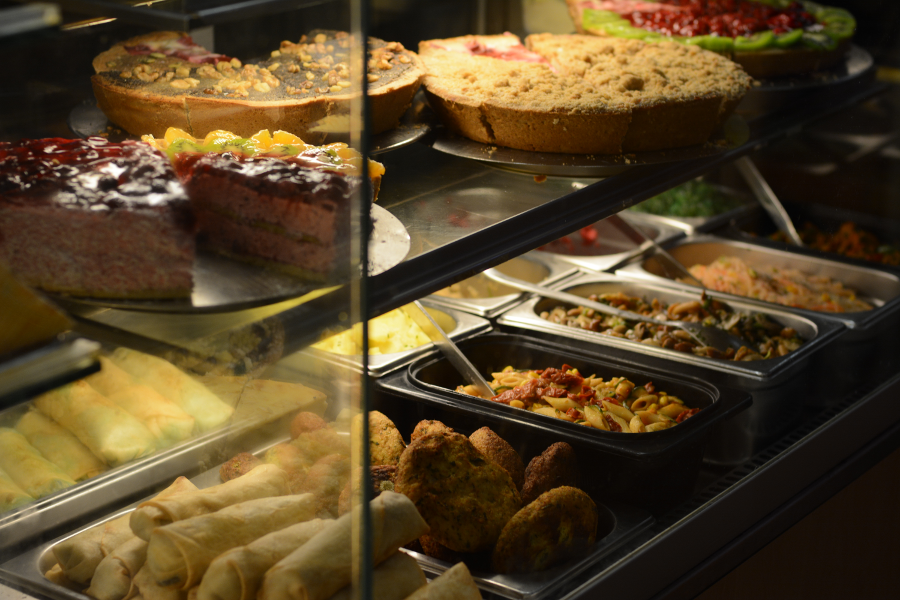 Café Ignaz, Munich: A small selection of the many nice vegetarian and vegan cakes and dishes.

The vegan apple cake was my favorite so far but I bet the other ones are delicious, too. Also, I urge you all to try one of those fruit Hugos.

Now, is vegan food nice and diverse? Definitely. Everything on the menu of this café is either vegetarian or vegan. So vegan food might be an option for me (if it’s not wrapped in plastic).

The atmosphere in Café Ignaz is comfy but a little bit cheap nineties style. It has three small rooms, very private and not too loud. Yes, there might be more hip places around this region, but the food is very good and the prices are fair, and it has a long tradition. You have a big menu to choose from and a special lunch menu for daytime. So go check it out and let me know what you had.

If you like more English posts or if you want to hear more about my weekly restaurant checks, stop sending me messages and emails. You can just write something in the comments, it’s as easy as vegan pie. Just enter an email address, no one will see it but me (and I don’t have enough time to stalk you) 😉